What happened to Onterrio Smith? 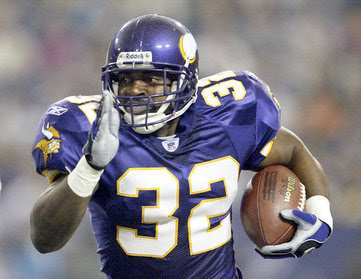 Countless people have asked me “What happened to Onterrio Smith?”.
I have heard every “Wizzinator” joke possible. They were funny to so many people, but not to me. Onterrio was my college roommate, good friend, and one of the most talented football players I have ever seen. Now, he is a legend in Sacramento High School football, and infamous for his fall from grace. His is a story we have heard many times, but its different because he is MY friend; star athlete with everything it takes to be a professional athlete falls victim to violence, drugs, or tragedy.
If you ever wonder what football coaches dream about I’ll tell you. They dream about players who are fast, powerful, elusive, strong, hard-working, tough, quick, mentally strong, with great hands, understands the game, leader, and a passion for being the best. They dream about Onterrio Smith. He was the best running back in the 2003 draft (even better than Willis McGahee), but slipped from a high 1st round pick to the 4th round because of “character issues” stemming from drug use. Mike Tice, former Minnesota Vikings head coach and current assistant coach for the Jacksonville Jaguars, said Onterrio was the best running back he had ever coached, and that he could have been great. That is high praise coming from a man who played in the NFL for 14 years and has coached for longer than that.
Onterrio came from a broken home in the projects of Sacramento to be a football star at Grant High School. After an illustrious High School career he accepted a scholarship to attend the University of Tennessee. It was clear from his first day at school that he was a star both socially and on the field. The Volunteer fans only got to witness his amazing abilities for one season before he was kicked out for marijuana use.
Onterrio then transferred to the University of Oregon where we met. From the moment everyone met him they fell in love with his magnetic personality. “O- Smith” would light up the room with his smile. He is one of the most likable, giving, caring, and charismatic people I have ever met, and quickly became a loyal and trusted friend. His fall hurts me so much because I know how he grew up. I know his family, his kids, and his story.
I remember the day I realized everything had changed like it was yesterday. Onterrio returned home after being gone for 3 days wearing the same clothes he left in. That same day I got a phone call asking if he was ok because the night before he had been waking up in cold sweats. Something about those events and his behavior just didn’t sit well will me, so I asked both ‘Terrio (as we called him) and our other roommate about it. They both told me I was trippin’, but in my heart I knew I wasn’t. Ladies and Gentlemen, that was the beginning of the end.
Addiction has no socio-economic or cultural bias. It can happen to any family. It can happen to people who may seem to be on the top of the world and have everything to live for. Darryl Strawberry, Stanley Wilson Sr., Ken Caminiti, Michael Irvin, Eddie Griffin, and Len Bias are a short list of athletes who have been victims of addiction. O-Smith, who had the potential to be one of the best running backs in the NFL, is another sad example of how drugs can ruin a life and career.

I watch a show on A&E called Intervention, which is a video documentary about addicts and their struggle with addiction. A camera crew follows alcoholics, drug addicts, and people with OCD, eating disorders, and other addictions. Those featured on the show do not know that they will soon face an intervention by their family. After the intervention, the addicts must either elect to enter a treatment facility immediately, or face alienation from those they love. It is a great show but it’s very sad to see how addiction affects not only the addict, but the toll it takes on their families and loved ones as well. Addiction has struck in my own family, but somehow Onterrio’s struggle hurts worse because unlike my family, I witnessed it happening. I talked to him, prayed for him, and helped him through rehab, but it feels like I failed. One thing I learned from this is for an addict to get clean he or she has to want to do it more than anything else in the world.

No one wants to be a drug addict. People like using drugs and alcohol because of the feeling they get from it or to escape their problems, but no one wants to be like the people on Intervention. Those featured on the show are at rock bottom or near it. When people begin using drugs they never think they will end up meth, ecstasy, crack, heroine, cocaine, prescription pill or alcohol addicts. After watching Intervention, seeing famous people fall victim to addiction, and watching my friend’s life and career tailspin out of control, I have but one thing to say: Just say no!!! However cliche it may sound, fact is that making one bad decision can shatter your dreams, ruin your life, and/or kill you.
One day I hope I can update this story with one of triumph, redemption, and recovery.
FacebookTwitterLinkedInRedditWhatsapp

The Not So Civil War