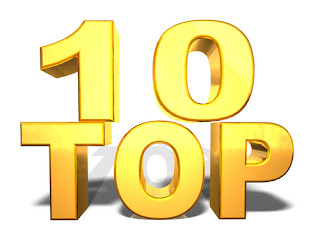 The Top 10 Quarterbacks list took a lot of time, hard work, dedication, and study. If you do not agree with the list you are wrong. There are a couple players who are playing their way on this list right now (Aaron Rodgers, Drew Brees). I’ll start with the honorable mentions and work my way to number one.

Dan Fouts- Hall of Famer and an Oregon Duck. He was the first quarterback to pass for over 4,000 yards three consecutive seasons, was selected two times All-Pro, and two times 2nd team All-Pro. He passed for over 40,000 yards and also won NFL offensive player of the year.
Fran Tarkenton- The proof is in the pudding. Tarkenton passed for 47,003 yards and 342 TDs. He was selected to nine Pro Bowls, was league MVP in 1975, and was All-Pro two times. Only one problem, no championships.
Doug Williams- First Black QB to win Super Bowl MVP. The QB was looked at as a white man’s position and for a long time and he helped change that. Doug gets on the list simply because he changed the game by breaking ground and paving the way for a new era of players. 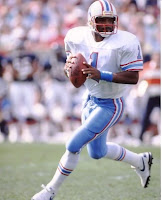 10. Warren Moon- He amassed over 49,000 passing yards and 291 touchdowns in the NFL alone. When you add his CFL and NFL career together, you see how truly great he was. He amassed over 70,000 yards 400 touchdowns. Moon was clearly an NFL quarterback, but was forced to the CFL because black quarterbacks were not given the same opportunity to lead NFL franchises as they are today. He was selected to 9 Pro Bowls, and was NFL league MVP in 1990. Moon, along with Doug Williams and James”Shack” Harris proved that great quarterbacks have no color. 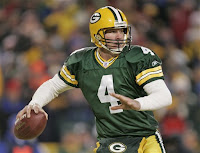 9. Brett Favre- He played at a high level until he was 40. The season before his last with the Vikings could have arguably been his finest if he had reached or won the Super Bowl. He is one of the best to play the position, but his stats are a product of inevitability with the number of years played. If it were not for a 1.5:1 touchdown to interception ratio he would be in the Top 5. But I will say, if he was not one of the greatest he could not have done it for this long at such a high level. He won’t WOW you with completion percentage or accuracy but he has everything you ask for in a great QB: Toughness, Leader, Winner, MVP, and Champion. 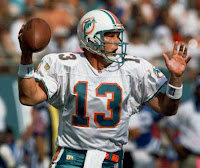 8. Dan Marino- Marino piled up a ton of stats but couldn’t stack them on top of a championship. People will argue that his unbelievable numbers make him the best of all time, but they don’t. Kareem Abul-Jabbar has easily scored the most points in NBA history and 3rd all-time in rebounds but we don’t call him the greatest of all-time. I cannot put him in the Top 5 because he has no championships. The reason he has no championships is because he never had a running game. His philosophy was why run the football when he could throw it further than they could run each play.

7. Kurt Warner- This Arena League QB who went undrafted out of college has turned into one of the best quarterbacks the league has ever seen. He bagged groceries for $5.50 per hour to earn money for his family and lived with his in-laws to keep his NFL dream alive. Now, Warner is a future Hall of Famer and owns the three highest single game passing yardage totals in Super Bowl history. He also earned the NFL league MVP twice and was the MVP of Super Bowl XXXIV. Warner has cemented his place in NFL history; all you have to do is check the record books. 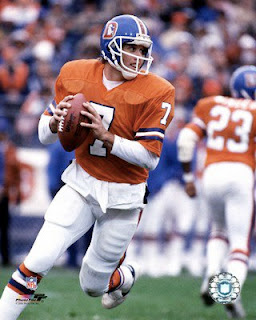 6. John Elway- California boy from Granada Hills HS (which is minutes from my house, FYI). When you hear “The Drive” you already know what game they are referring to (Jan. 11 1987 Denver Broncos vs Cleveland Browns in the AFC Championship game). He has championships, wins, played in five Super Bowls, and basically invented the 4th quarter comeback stat! Not only was he selected to nine Pro Bowls, he is also a two-time Super Bowl Champion, Super Bowl MVP, and 1987 league MVP. 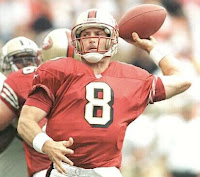 5. Steve Young- If “Montana to Rice” was a good combo “Young to Rice” was even better. He helped revolutionize the position to what it is today. Teams only wanted a “pocket” passer until Young showed how much a mobile quarterback could help the offense. Three time Super Bowl champion. Two-time NFL MVP. Young holds numerous NFL records including highest career passer rating (98.6), and most rushing touchdowns by a QB (43). And he did it all with a disability, he’s left-handed. Joke. LOL 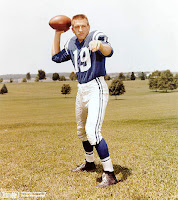 4. John Unitas- Innovator of the passing game. He revolutionized the QB position therefore he changed the game. There would be no Jerry Rice or Randy Moss without Unitas because there would be no Young, Montana, or Brady. I would not be acknowledging history if I left “Johnny U” off the list. Its like Michael Jordan. A better/more talented player may come along but he will always be regarded as the man who changed the game; the original QB. He was league MVP three times and still owns the NFL record for most consecutive games with a TD pass (47) which has stood since 1960! 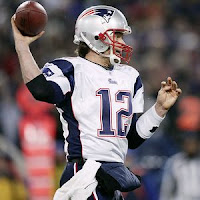 3. Tom Brady-This man has three championships. Brady, aka the “Check Down King” is calm, cool, and collected. In big game situations ice water runs through his veins. All he does is, “win, win, win, no matter what”. When I first made the Top 5 list last year I had him as an honorable mention. He has since assaulted the record books and won another league MVP. Brady has 3 championships and 2 Super Bowl MVPs. That said he is still clearly one of the best QBs of all-time. Some might even argue that he should be above Manning, but I give his team and head coach Bill Belichick higher marks than Manning’s supporting cast. Brady missed a season and his team still won 10 games. Manning is missing a season and the Colts are the worst team in the league. 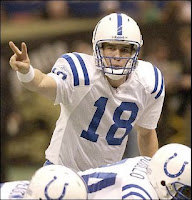 2. Peyton Manning- We are watching him rewrite history. He is the fastest QB in history to reach 4,000 completions and 50,000 passing yards. Manning is an 11 time pro bowl selection, and has been voted all-pro 8 times. There isn’t a  throw he can’t make or a receiver he doesn’t hit in stride. Peyton is the consummate perfectionist, but you could never tell by his pre-play antics. At first glance he looks like a mad man in disarray, but after the whistle blows and the clock has all zeros you know Peyton is the Chess Master. Defenses try to throw everything at him: blitzes, zone dogs, and every other scheme, to no avail. He will be #1 on this list while he is still in uniform with one more championship. Do I really need to list ALL his stats to qualify this? Peyton has missed most of the 2011 season, and the Colts are 0-8. He is clearly the most important player to his team in the league, and one of the greatest to ever wear cleats. 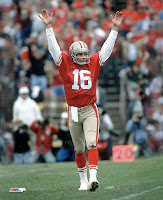 1. Joe Montana- The best QB of all-time. Four time Super Bowl champion. Three time Super Bowl MVP. Two-time league MVP. He holds postseason records for most career passing TDs (45), games with over 100.0 passer rating (12), and games with 300 passing yards (6, recently broken by Manning). The most important stat of them all, 0, that’s the number of interceptions he threw in four Super Bowls! What more can you say? He is the very definition of what a coach, owner, or teammate could ever ask for in a QB!
FacebookTwitterLinkedInRedditWhatsapp Tiger Woods and Peyton Manning Will Win The Match: Champions for Charity