First off, I am rocking an Oregon Ducks t-shirt as we speak! We lost last night but I am still Very proud to be a Duck. Now lets get to the real story. University of Oregon running back LeGarrette Blount has been suspended for the entire season! This is another Plaxico punishment. Another person who has been made an “example” of. I have never heard of a year long suspension for a fight especially when the person you were fighting was also in the wrong. LeGarrette Blount should not have punched Byron Hout, but he got what he deserved. Hout showed NO class in the way he hit Blount’s shoulder pad and jumped in his face mocking him after the loss. Those are the type of things that happen when you do things like that. The NCAA is emphasizing sportsmanship this season and Hout’s behavior was obviously not sportsman-like and inappropriate. BSU coach Chris Peterson even grabbed Hout because he saw what he did and how classless and unnecessary his actions were. There needs to be a 1 game suspension for Hout! If my son had done what Hout did and got punched, I would shake my head as I’m telling him, “Bet you won’t do that again!”. After the punch heard round the world Blount was walking away peacefully when people in the crowd obviously said some “magic” words that would even make a calm man enraged. People may disagree with me but I have played in certain parts of the country where those type of things happen regularly!
Blount needs to use better judgement and control himself even when provoked by classless individuals. A 3-4 game suspension for Blount would have been fitting. Media outlets, YouTube, and TV analyst talking about it was “egregious”. I’m watching TV and reading twitter and the Internet and all these analyst and writers are throwing around these million dollar words and phrases making this the worst thing that ever happened. They are saying, LeGarrette Blount’s actions are despicable, horrid, classless, and that they are appalled and outraged that this could happen. Seriously, all that?
Now here is the “gotcha, gotcha” because there is always a “gotcha, gotcha”…
Many people want to talk about Boise State competing for a BCS spot and a National Championship, but I will be the 1st to say they don’t have what it takes. Let me just say, I like Boise State because their coach Chris Peterson was the WR coach when I was at Oregon, and I played with their Defensive Coordinator Justin Wilcox, but Hout got punched right in front of all his teammates and no one did anything to Blount. They stood by and watched. This would never be allowed to happen to any team worth winning a championship! If that would have happened to an Oregon, Florida, Alabama, Texas, or USC player it would have been a riot. Teams have to stick together through thick and thin, right or wrong, and have a “ride or die” mentality to win championships! They should have had to dig Blount out of a pile of blue and orange jerseys, but like I stated, I don’t promote violence, just protecting my teammates!! 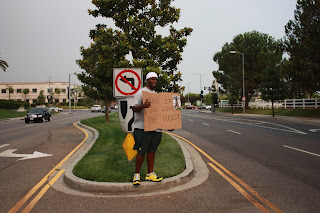 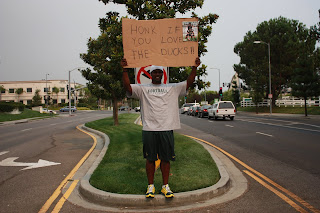 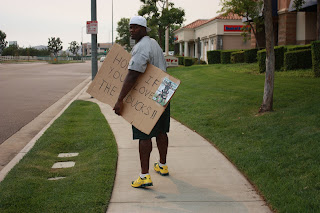 I had a cool time in high school, but for the most part, I felt like a fish out of water, but then came the University of Oregon. I didn’t know what to expect when I got to Eugene. All I knew about the U of O was Nike, Prefontaine “Track Town USA”, and Duck football. I learned quickly what the 541 was all about. I loved my time in Eugene. My favorite breakfast spot GJ’s, our favorite bar Taylors , the U.I. dorm , the CASS and most importanly, Autzen stadium, the crowd, and the student section. AMAZING!!! I’ll never forget Apartment #90 which consisted of #1 aka SP aka Samie Parker, #2 aka O-S*#@*y aka Onterrio Smith and myself aka Rice-Daddy. Man, if those walls could talk, lol, but I’m glad they can’t. Oregon was totally different than any other place I had ever been into my whole life, but yet it was home. Some of my fondest memories are from my time in Eugene. College was truly some of the best years of my life to date. A lot of things in my life may change, but one thing that will remain the same is I will always and forever be an Oregon Duck!

I’ll never forget every home game the PA announcer would say “It never rains in Autzen Stadium”. Which to me, being from Sunny So Cal, was very ironic, because I felt like it was always raining in the northwest. I still get chills thinking about scoring a touchdown and that loud fog horn going off and the band playing the fight song “Oregon our Alma Mater, we will guard thee on and on….”! I loved playing for Oregon, and now that I am in the pros, I love being a fan of Oregon. I always had my duck gear in my locker at the stadium. At least once a week in the offseason I workout in a Duck t-shirt, shorts, and my Nike Shox Duck editions (Oh Baby)! I even made a bet with my teammate Mo Williams 2 years ago that MY Ducks would crush his minuscule Wolverines, and of course they did. Mo had to wear my College jersey all week, haha GO DUCKS!! I hang on to every play of Duck football. All my teammates in Jacksonville knew when we went to away games I was only going to eat dinner at a place that had my Duck’s game on! God Bless satellite tv!! 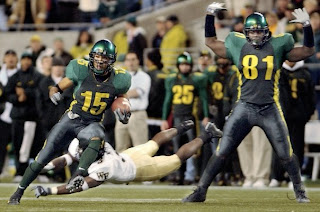 Two years ago we had the National Championship and the Heisman Trophy in our grasp and it all went down the drain when Dennis Dixon fell to the ground clutching his knee. We were on cloud nine, riding high on the backs of Dennis Dixon and Jonathan Stewart, and just that quick we had to settle for a SCHLacking of South Florida in the Sun Bowl 56-21. I was devastated. It felt like I was on that team and “we lost”. I now know what “REAL” fans go through and how they feel. I have a much deeper respect for the fans of our game. 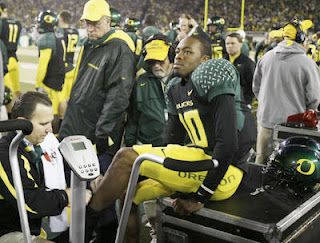 On Thursday we begin our quest for another PAC-10 title and a chance at a National Championship. Although I can’t be there in person I will have my flatscreen on and my popcorn ready. It won’t be an easy game, (we are playing against former Oregon coaches). We are taking on the Broncos of Bosie State, on their “Smurf Turf”. The Broncos have a good team and are always tough at home, but I know the Ducks will take care of business. This year will be a good year for us up in Eugene and I will be here with my duck gear on cheering the whole way. I just can’t wait until my son is old enough to really appreciate the game, so I can take him to a game at Autzen stadium, “the loudest place on earth” (for the enemy). 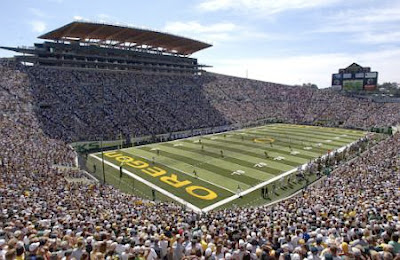 I was so juiced when I saw the Ducks on the cover of Sports Illustrated. I was thinking, finally, we are getting some respect. I know some of ya’ll out there are skeptical of calling us a Football Powerhouse, but keep watching and trust me, you’ll see. It’s ok, I won’t say I told you so. Actually, YES I WILL!!! GO DUCKS!!!