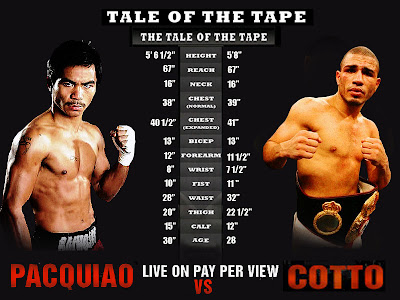 * Experience- Pacquiao has had more “big fights” and against better opponents. He has stopped great fighters like: Ricky Hatton, Oscar De la Hoya, Erik Morales, and gone the distance with Marco Antonio Barrera and Juan Manuel Marquez.
*Defense- Pacquiao is one of the most aggressive fighters in the game and lays it on the line time after time, but in his last few fights there has been a noticeable change. Freddy Roach has taught Manny how to control his aggressive nature and minimize his risk of getting knocked out or hurt by a good punch from an inferior fighter. The combination of Cotto’s wide looping punches and average defensive skills will be a recipe for a Pacquiao knockout between the 7-9th round.
*Antonio Margarito- Cotto was fast on the rise when he stepped into the ring with Margarito. Margarito beat Cotto to a bloody pulp that required him to leave the arena in an ambulance. When it comes to boxers, ego and confidence are everything. Once you lose that feeling of invincibility you will never be the same. There has been many questions raised regarding the Maragrito/Cotto fight in light of Margarito being suspended for a year for attempting to use “plaster of paris” in his hand wraps against Mosley.
*Philippines- Both boxers respectively have their entire country behind them and are depending on their hero to bring home a victory. Pacquiao has the most riding on this fight. The Philippines have been ravaged by typhoons and Pac-Man knows the people need a morale boost.
*The Entire Boxing World- This is a big fight, but everybody who loves to see great fights will be rooting for Pac-Man. Why? “Pretty Boy” Floyd “Money” Mayweather. The only chance a fight between Pacquiao and Mayweather will take place is if Pac-man wins. The #1 “Pound for Pound” fighter vs the real #1 “Pound for Pound” fighter. You can pick which one is which, but it’s hard to go against the guy with 0 losses!
Cotto is a great boxer and is worthy of a lot of respect and can win this fight with a well executed game plan and some vastly improved defense. The grumblings amongst Pacquiao camp members is that the typhoons could actually serve as a distraction and open a window for Cotto to get a huge win. I’m hoping this fight will be 7-9 rounds of entertaining action. The “Sweet Science” of boxing needs a great fight that will lead to another Super Fight. 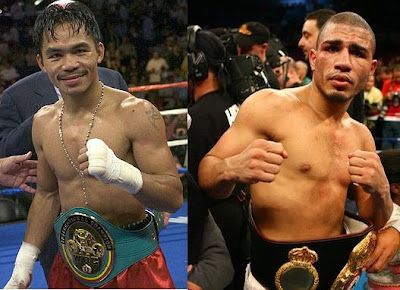