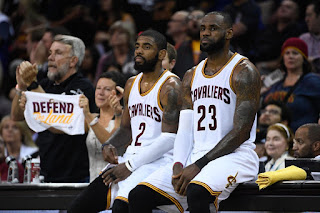 Kyrie Irving’s desire to leave Cleveland on if face looks like an attempt to get out Cleveland before LeBron does, or a desire for more opportunity for a bigger role. What if it’s neither of those? What if Kyrie is motivated by a desire to play team basketball instead of “LeBron Ball”?
*LeBron Ball- style of basketball where LeBron facilitates all offense and teammates are turned into isolation scorers, or catch and shoot players.
Much of the criticism of Kyrie’s game is centered on him being and isolation scorer and lack of playmaking for teammates. So naturally when he asks to be traded it looks like he wants more spotlight and recognition. I disagree with that idea. I believe Kyrie wants out because he wants to team basketball the right way, not LeBron’s way. Look at the teams reportedly highly desirable trade destinations for Kyrie. San Antonio, Houston, Minnesota, Miami, New York. With the exception of NY (I have no idea why he would want to go there) what do all these teams have in common? He would not be the #1 offensive option on the team, and they all run an offensive system where no 1 player facilitates the entire offense. For 2 decades, no team/coach has empowered his role players, and bench players to be contributors than Popovich in San Antonio. Mike D’Antoni offense in Houston allows very little isolation offense. Tom Thibodeau in Minnesota is known for his defensive prowess and he has no “Superstar” so everyone has to contribute to facilitating offense. The same is true in the post Big 3 era with Spoelstra in Miami.
Kyrie’s list of teams he wants to be traded to clearly demonstrates a desire to play a beautiful brand of basketball. The kind of poetry in motion we see from Golden State, and San Antonio when every player on the team is giving a master class on screening, cutting, and passing to create easy shots.
This may sound like a knock on LeBron, and on some level it might be. But, proof is in the pudding. When the Cleveland Cavaliers do not have LeBron James on the court, even for short stretches, opponents routinely massively outscore them. Why is that? His teammates suck. Nope. His teammates are not empowered to initiate and facilitate offense like other teams. On San Antonio, Houston, Minnesota, and Miami their teams are able to maintain and sometimes extend leads with their stars on the bench because 1 player does not dominate the facilitation of offense. The Cavs don’t score a lot of assisted points (especially in the playoffs) when the pass did not come from LeBron James. Other contenders do. Kyrie is a magnificent scorer and finisher around the rim. Imagine him playing in a system that empowered all his teammates and he occasionally had to isolation score.
Being an isolation scorer takes a lot of energy and long term it makes you a far less efficient scorer. See Kevin Durant’s stats from OKC playoffs vs. GSW playoffs.

Chris Bosh told Kevin Love playing with LeBron is tough. He has found out, so has Kyrie. At least they got a championship in the process. Now can you blame Kyrie for wanting out?
There is a silver lining for distraught Cavs fans. Kyrie being traded may make it more likely LeBron stays in Cleveland. I have been silent on my blog for a while now. I’m back. Inspiration has arrived in the form of Chris Bosh. Anyone who knows me knows that I am a Laker fan. As a Laker fan I have seen some of the best “flops” of all-time. Vlade Divac, former Laker center and G.O.A.T., was a unanimous first ballot selection for the Flopping Hall of Fame and has recently opened a school specifically dedicated to the art of flopping. They recently started a very exclusive program, “Acting To Get A Whistle: Defense”. Here is my letter of recommendation for Chris Bosh.

To Whom It May Concern:

I would like to take the opportunity to offer a formal recommendation for Chris Bosh. Recently, I learned of your “Acting To Get a Whistle: Defense” program and I am confident Chris has the tools to be an exceptional student. As you probably already know, he recently joined Dwyane Wade and LeBron James and took his talents to South Beach to form the “Big 3” in Miami. Although Chris is one of the best big men in the NBA he has not been met with the same celebration from fans as Wade and James. Admission to your ATGAWD program will give Chris the skills necessary to change his image as a soft player and be loved by his hometown fans. I was watching the Heat vs Bulls game last night and saw Chris Bosh flop. I immediately knew he had the raw talent and intangibles to be one of the flopping greats. He successfully pulled off the worst flop in NBA history. The work your program has done with some of the future Flopping Hall of Famers like Anderson Varejao, Paul Pierce, Manu Ginobili, Raja Bell, Andrei Kirilenko, and Derek Fisher has been nothing short of incredible. An education at your esteemed school will help him reach that level, while increasing his career opportunities. I highly recommend Chris Bosh for your program and thank you for your careful consideration of his application.