I was scrolling through my twitter feed and could not believe my eyes when I saw this post in USA Today… ‘Anonymous Oregon Boosters want Chip Kelly gone.‘ 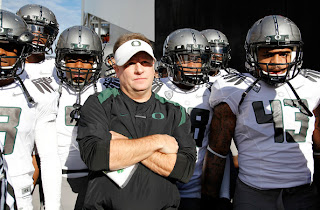 This could be one of the more troubling things I have EVER read about my Ducks. Everyone knows I bleed Oregon Ducks green and yellow… and black and gray… and white and carbon fiber and (of course) chrome. I hope I speak for all the Duck faithful when I say to these “anonymous boosters”:   Get on board with the program AND CHIP KELLY or find another team to booster for!
Have you forgotten where we came from?  We have won 3 of the last 4 PAC-12 titles and been to 4 consecutive BCS bowl games. Oregon was an afterthought in the world of powerhouses in college football. Oregon is now arguably the BIGGEST brand in the NCAA. But you want to get rid of the coach because he doesn’t want to play golf with you or pretend to be your friend?  Get over yourself.  Chip Kelly is 45-7.  That’s over 85%. Find a coach with a better record than that. While you’re at it, find another coach who is revolutionizing the way college football is played.  I’ll wait… You can’t!!! I do understand that Chip can be short and keep things very close to the vest. That can be very frustrating at times but what do you want more?  A football coach building a powerhouse… or a politician?  You are the people that cause empires to fall and potential greatness to be ruined.  There will be a day Chip leaves and we will use our “next man up” attitude but what sense does it make to try and push him out the door now? This is absolutely absurd. 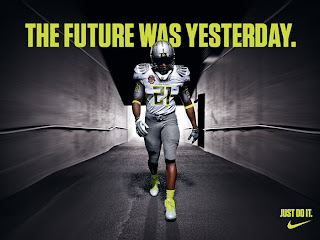 “Anonymous Boosters”:  You are selfish, self-serving, cowardice, and do NOT have the program’s best interest at heart. You must be solely concerned with feeding your own ego and show off to your friends that you are friends with the coach. If you are going to make bold statements that could be damaging to the program, don’t hide behind the shield of anonymity.  Stand behind the words you speak. Before you do, however, be sure to realize that we are in the thick of a recruiting battle for the nation’s best players. As a recruit, the LAST thing you want to think is that the coach may leave. When I was being recruited from high school, the ONLY reason I did not go to Arizona is that I knew Coach Tomey would be fired.
I LOVE the University of Oregon and I hang on every snap of the game whether we are up by 5 or 55.  You are a booster.  Deep down, you do love the program…  but you have clearly lost your way. I really hope you come to your senses and stop tearing down the program that so many people have spent 2 decades building. Let’s get back on the same page.  Let’s support our coach and commit to doing everything possible to win a National Championship. If you cannot do that…  on behalf of Oregon fans, players (past, present, & future), and alumni… We don’t want Chip Kelly gone. We want YOU gone. #GoDucks
Sincerely,
George Fredrick Wrighster, III
TE ’99-’02

Who is USC? They are not the football program they used to be. 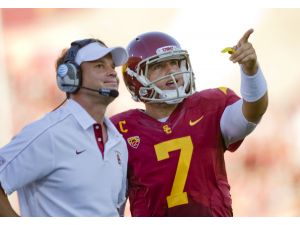 The Trojans came into the 2012 college football season ranked #1 in the country! Expectations had not been this high since the Reggie Bush era. After 2 seasons of post-season bowl bans USC was predicted to reclaim Pac-12 dominance and national prominence. The Nov. 3 game vs Oregon was supposed to be a top 5 showdown with the winner to play either  LSU or Alabama game in the national championship. Instead, USC showed up to the game with two losses and a head coach on the hot seat. After getting beat up by the Ducks, the Trojans are 6-3 and must-win every game in order to make the Pac-12 title game and avoid a disastrous season.

Just when the USC athletic department thought the black eyes would stop, they keep getting hit from every angle. Lane Kiffin inherited many of the challenges he has faced as the Trojans head coach. However, the newest bruises to the Trojans, excluding the losses, are self inflicted. Many uninformed people are crediting USC’s troubles to the lack of depth due to scholarship restrictions imposed by the NCAA. Reality is, USC signed a full recruiting class last year plus a few extra players due to 7 players who transferred for a total of 31 signees. The scholarship losses are coming but have little to do with the problems at hand now. 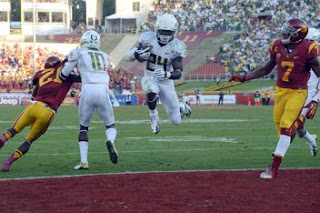 The fabric of tradition and dominance USC once showed over the Pac-12 is slowly coming apart at the seams. The mystique is gone and so is the respect and pride that used to cause teams to crumble from the shadow of the Coliseum. The Trojans are still a hot bed of talent for the NFL, but those numbers dwindle over next few years with the loss of blue chip recruits to other schools like Oregon, Washington, and even UCLA. The Trojans have lost the strangle hold they had on the Pac-12 to the Ducks, who have won three straight titles. Top recruits (i.e. Max Redfield) who wouldn’t consider other options after being offered a USC scholarship are considering taking their talents to other schools. Even worse than that, the Trojans are losing their identity and pride. Part of the identity was tied to the uniform. SC’s traditional uniform complemented with white socks and black cleats with white laces have been traded for cardinal and yellow socks and shoes. This may sound like a little thing but after talking to many players I played with in the NFL, they agree with me. Now to the pride:

On Oct 20 SC played the Colorado Buffaloes, who is one of the worst teams in college football and the current Pac-12 punching bag. Lane Kiffin and the USC staff pulled a move that can only be characterized as “Bush League”. Here is the Quote from the LA Times article:

Cody Kessler is easily identifiable in the No. 6 jersey the reserve quarterback has worn in his two seasons at USC.
So confusion reigned last week when Kessler played on special teams in the first half against Colorado — even running for an apparent two-point conversion — wearing No. 35, the same number worn by punter Kyle Negrete. In the second half, Kessler was back wearing No. 6.

When asked about the controversy after the game Kiffin said, ” We’re just playing within the rules of college football”. This move by Kiffin is clearly against NCAA rules because the jersey change was to deceive the opponent. He is also only one of a handful of coaches who could attempt a stunt like this because nearly all teams have names on the back of their jerseys.

Today it was just announced here that USC fired a student equipment manager for intentionally deflating game balls during the first half of the loss vs Oregon. When footballs are properly inflated they are hard as rocks. A slightly under inflated ball allows the quarterback to grip it tighter and throw it harder and further. It also allows the receiver to grip the ball better and making it easier to catch.

“When informed of this allegation by the Pac-12, USC investigated it immediately. The student manager confirmed that he had, without the knowledge of, or instruction from, any USC student-athlete, coach, staff member or administrator, deflated those game balls after they had been tested and approved by officials prior to the game.”

Really… Are we supposed to believe a frat boy equipment manager just under inflated balls without anyone’s knowledge in the biggest game of the year? Yea right. Equipment managers know that quarterbacks are very particular about the balls they use. There is no way he would have bothered the balls without consent or knowledge from authority. While this violation brings a fine and reprimand, the bigger punishment is another bruise to the USC name.

NCAA sanctions for recruiting violations and improper benefits are one thing, but shaky in game tactics are a whole different ballgame. You might expect a school that is completely undermanned to try these things. Is this what it has come to with USC?

USC is a football program rich with history, tradition, and accomplishments. Their history is becoming increasingly difficult for fans, recruits, and to see though the dark clouds over the Coliseum.  If USC is not careful they will end up just a shadow of their former selves like Notre Dame, Michigan, Miami, Tennessee, Florida State, and Alabama (before Saban). 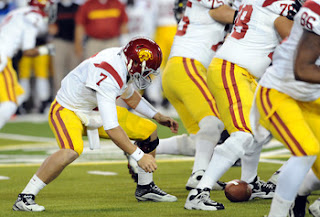 Is this what we should expect out of the “mighty” USC?

Is it possible to right the ship? If so, how and when?